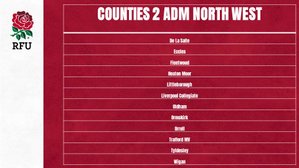 The 2022/2023 season will see a change to how rugby is structured in the adult male game. These positive changes will deliver a revised structure, rebranding and new Cup competition.

These are the most significant changes made to the competition structure in 30 years and are designed following feedback from clubs and players responding to their needs and changes in society. These changes are intended to reboot and re-energise community rugby, improving player retention and attracting new players to the adult men’s game.

All the information you need to help you prepare for the upcoming season and beyond is below, as well as an overview of why the changes are being made.

See news release on discussion as below......

Clubs will have been sent the message below from the RFU announcing the re-unification of the RFU Leagues and the adm County Leagues. Whilst its early days the dialog between the RFC FCS and both Lancashire and Cheshire CBs has been most cordial with the shared aim of re-integrating those clubs that made up the adm Leagues back into the RFU League structure. The new Leagues at Level 7 down will be administered by the adm League Management Committee on behalf of the RFU. More details to follow.

We are delighted to be able to report that following a constructive process of dialogue and engagement with between the FCS Implementation Commission, clubs, CBs, North DOC and Council Members, the Lancashire and Cheshire clubs that formed the ADM Leagues will be re-joining the English Club Championship (ECC) as of the 2022-23 season. We are working through the final details of the leagues, but we will be welcoming some 40 clubs back to the RFU competitions structure. We can also confirm there will be four levels of leagues (that previously would have been known as level 7-10) and as they will be part of the RFU league pyramid, it will provide a path to promotion to higher playing levels for clubs with the desire to achieve this.

The finalised league structure for the 2022-23 season will be released to the game (along with all other FCS changes) by the 20th May with fixtures being published by mid-June.

FCS Group Chair, Stephen Pearson commented "A united English league structure was a key objective at the outset for us. A broader participation of Lancashire and Cheshire clubs, alongside the rest of our clubs in England, will enhance the standing of the Cup and League offering; our National RFU cup champions really will be national champions. Thanks to all those involved in making that happen"

Lancashire’s Director of Rugby Howard Hughes explained. ‘With our continued expansion and the RFU Future Competitions Structure about to be implemented nationally it became clear that it would be mutually beneficial to bring everyone back together. The RFU have delegated powers to the a League Management Committee (that will include Cheshire and Lancashire representation) and we will continue to keep the structure as vibrant, innovative and welcoming as it has since its inception.’

Council Member for Cheshire, Colin Free commented 'we are delighted to reunite with Lancashire RFU in the leagues which will see a return of (what was) South Lancs & Cheshire 1, 2 & 3. We have of course continued to work and cooperate with Lancashire and I know that our Clubs who were accepted into the ADM leagues have been grateful and have enjoyed the experience. If it isn’t broken then let’s use the best of everything to allow clubs to progress in the pyramid if they wish to. Thank you to all concerned for their hard work, dedication and fortitude to make this happen. We look forward to a great season starting in September.'

We hope this brings clarity and greater certainty for clubs going into the 2022-23 season and will be welcomed as good news.